If you ever flirted with the idea of learning how to play the piano, you might have come across the offering for some of the best electric keyboards. Given that the price range for traditional pianos ranges from a few thousand to a few million dollars, many beginners turn to keyboards. Doing so allows them to start playing for a relatively low few. It is also much more convenient in terms of portability. Since the lightest pianos weigh between 300 and 400 pounds, they are seldom moved. Keyboards, on the other hand, offer fewer keys and an electric-powered system, which makes them incomparably lighter. 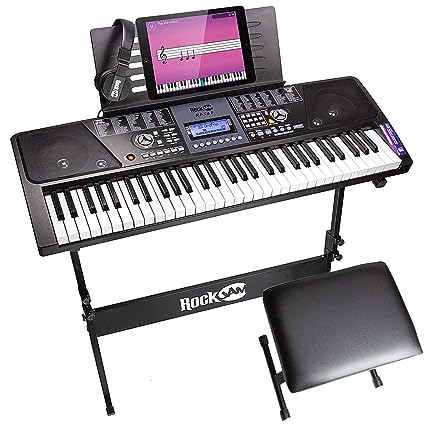 RJ561 is RockJam’s top-selling electric keyboard that has 61 keys. Buyers also receive a portable stand, a black stool, and all power supplies. As with most modern options, the keyboard is headphones-accessible, so you will be able to play without disturbing anyone around you. The low price combined with thousands of satisfied buyers further cements the status of RockJam 561 as one of the greatest alternatives in the market. 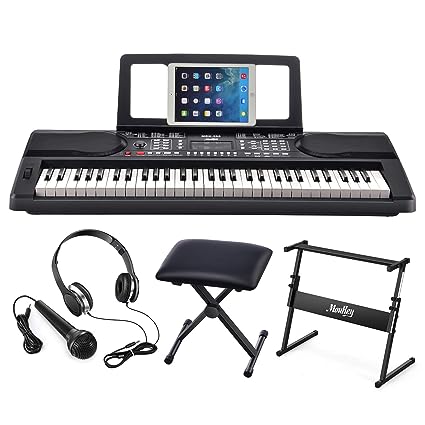 Coming in at the same price, Moukey MEK-200 is fairly similar to the aforementioned product. The keyboard has 61 keys, a headphone jack, and a built-in stand for the music sheets, and the package arrives with the microphone, the stand, and the color-matching stool. One of the main differences is the fact that the reviews for Moukey MEK-200, whilst much fewer, carry a better average than the RJ561. 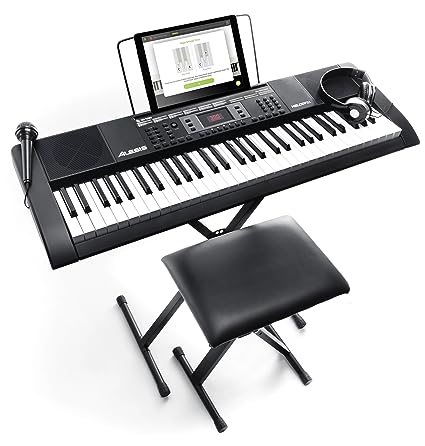 Alesis Melody 61 MKII is about as close as you can get to a product that bridges the gap between the previous two keyboards. The full-size keys accompanied by an outstanding total of 300 built-in sounds make this an incredible learning tool. Folks who have no experience can also use one of the 40 demonstration songs to get started. The hardware includes the stand for the keyboard and the stool for the player, and the overall price is substantially lower than it was for the first two options. 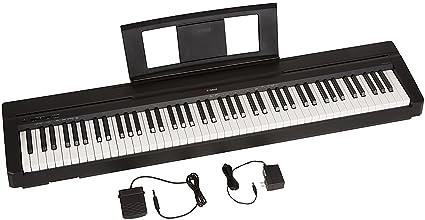 As an undisputed leader in the field of electronic keyboards, you should always look into Yamaha’s catalog. While it has more keys than any of the prior options, the P71 is the Japanese company’s best-selling portable keyboard. It has 88 full-size keys and a sustain pedal, which is extremely uncommon. The price is definitely on the higher end of the spectrum, especially for those who decide to get the “home bundle” with the stool and a full-size tablet. 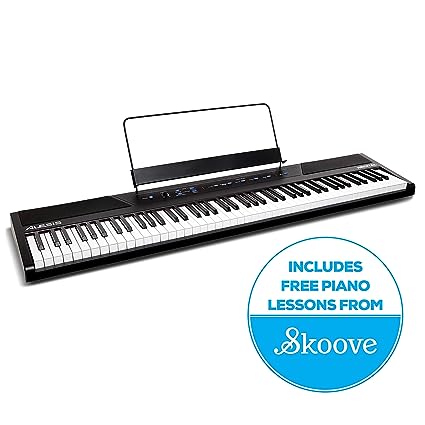 If you want to get a large keyboard without paying a premium price, Alesis Recital may be the solution. With 88 keys, it will be hard to find any product that delivers more bang for your buck. Regardless of the size, it is still easily portable. Besides the traditional sound, you will also be able to select modes for organ, synth, and bass. Since each key is semi-weighed, it is safe to say that Alesis is the closest you can get to an actual piano. 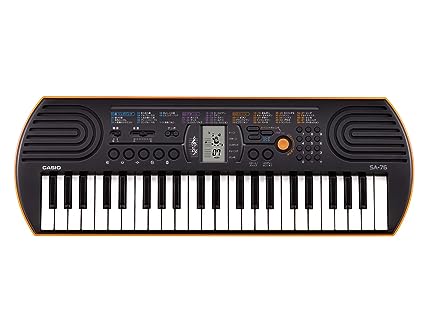 Since many people want to begin the learning process as painlessly as possible, Casio SA74 was made. With the lowest price on this list and only 44 keys, it is the best portable keyboard here. Since a lot of children or younger players cannot quite handle 61 or 88 keys, many parents purchase SA74 for them. Nonetheless, the device is still packed with 100 sounds, 50 rhythms, a Liquid Crystal Display, or LCD, and a 10-song bank. Unlike other keyboards, it is powered via 6AA batteries, not a power cable that connects to an outlet. 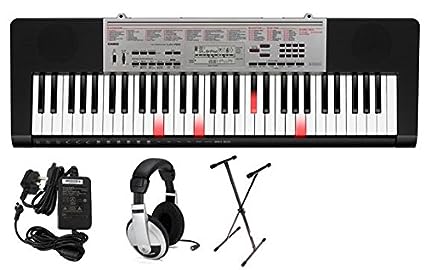 Entering the scene with the highest average rating thus far, Casio LK190 is SA76’s big brother. Courtesy of the additional 17, it has 61 full-size, semi-weighed keys. To improve the portability, Casio also made the device as light as possible while maintaining all of its technical abilities. In case you are just getting started, you will have access to 400 sounds and a “Lesson Lite” system that facilitates faster learning. If you would like to save on the transaction, you can always opt-out of buying the stool, the stand, and the headphones. 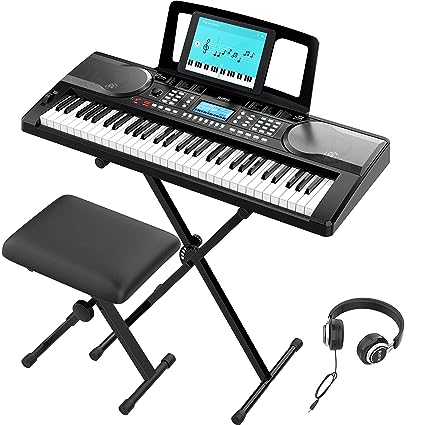 Even though Casio LK190 has an incredible rating, the introduction of the RIF6 puts it on the second place of the highest-rated keyboard on the list. After all, it is borderline impossible to compete with 94 percent of perfect evaluations that RIF6 has. Built for both beginners and advanced players, it is a contemporary version of a shortened, 61-key piano. RIF6 is also one of the two most affordable alternatives for anyone seeking the full package of accessories. 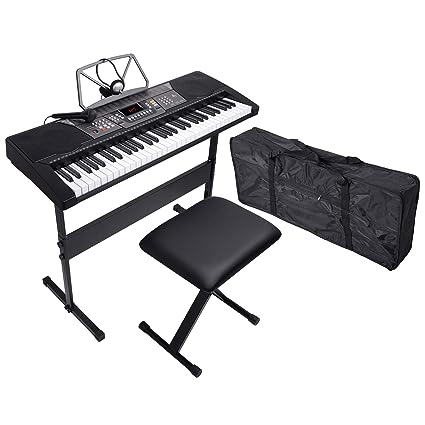 The cheapest keyboard with 61 keys comes from LAGRIMA. Equipped with a full-size stand, which is either H- or X-shaped, buyers will get everything besides the stool. Unfortunately, the device does not support external electronics such as headphones or microphones. This is quite fair considering that it costs just a bit more than the 44-key Casio SA76. The primary audience for the seller is comprised of inexperienced players that do not have any sound-based restrictions within their residences. 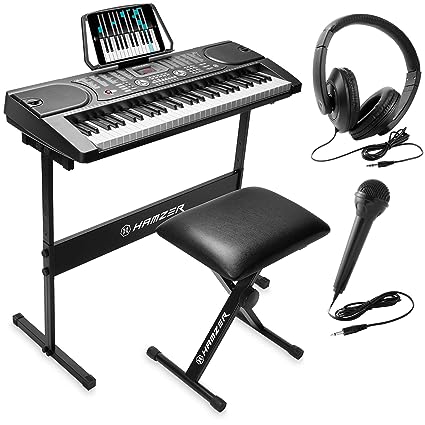 Finally, a list showcasing the best piano keyboards would be incomplete if the Hamzer keyboard was not mentioned. The reason why is that it has one of the best combinations of affordability, accessibility, positive reviews, and overall features. Some of its highlights incorporate 255 built-in rhythms, 24 demonstration songs, multiple power options, which include 6AA batteries and the traditional outlet, and countless accessories. Also, players can connect the keyboard to their computers and digitalize their work.

Since the process of learning how to play any instrument is very challenging and lengthy, it is important to get started as soon as possible. When it comes to becoming a pianist, however, there are thousands of hidden quirks that make the venture exciting. To sidestep the enormous cost of full-size pianos, which discourages a lot of prospective players, you should look into some of the best electric keyboards that were mentioned.