From Legally Blonde to the animated hit Sing, Reese Witherspoon has made a ton of great movies! Whether you’re looking for something to watch this upcoming movie night, or are craving a Reese Witherspoon binge-watching session, we’ve got you covered. Keep scrolling for the 30 best Reese Witherspoon movies, ranked.

Director: James Mangold
Starring Reese Witherspoon and Joaquin Phoenix, Walk the Line is a powerful biopic about country music legend Johnny Cash. The film recounts Cash’s life from his early days as the son of an Arkansas cotton farmer to his marriage to June Carter. Considering Witherspoon’s portrayal of June Carter Cash won her her first Best Actress Oscar, it makes perfect sense that this is ranked the star’s best movie.

Director: Mary Harron
Based on Bret Easton Ellis’s novel of the same name, American Psycho is the story of Patrick Bateman, a wealthy New York City investment banking executive. Bateman hides his psychopathic alter ego from his friends and co-workers as he sinks deeper into his violent fantasies. Witherspoon plays Evelyn, Bateman’s fiancée.

Director: Gary Ross
Pleasantville is both entertaining and a powerful social commentary. It stars Witherspoon and Tobey Maguire as two teenage siblings in the 1990s who find themselves stuck in a 1950s sitcom. As the two navigate the unfamiliar world, they find that their influence begins to profoundly change the complacent world that is Pleasantville.

Director: Jeff Nichols
Starring Matthew McConaughey, Mud follows a fugitive who forms a pact with two young boys who agree to help him evade the vigilantes tailing him. Witherspoon plays Juniper, Mud’s longtime love and the only person to whom he’s trying to return.

Director: Robert Mulligan
That Man in the Moon was Witherspoon’s first ever feature film role. Teenage Witherspoon plays 14-year old Dani Trant, a typical kid coming of age in Louisiana in the days when Elvis was King. Witherspoon was an instant star, as evidenced by her nomination for Most Promising Actress at the Chicago Film Critics Association Awards. She received another nomination for Best Young Actress Starring in a Motion Picture at the Young Artist Awards.

Director: Philippe Falardeau
The Good Lie is the story of a group of Sudanese refugees who are given the chance to resettle in the United States. When they arrive in Kansas City, they find their transition much harder than they ever imagined. In the film, Witherspoon plays Carrie Davis, an employment counselor who ends up going above and beyond to help the boys adapt to their new home.

Director: Alexander Payne
This is based on the novel by Tom Perrotta. Election stars Matthew Broderick as a high school teacher whose personal life becomes complicated as he helps a group of students prepare for the upcoming school elections. It’s made more complicated by an especially obsessive overachiever named Tracy Flick (Witherspoon).

Director: Various
Return to Lonesome Dove is a four-part, made-for-TV movie that initially aired in 1993. The miniseries continued the adventures of the cowboys associated with Lonesome Dove. In this sequel, Witherspoon plays Ferris Dunnegan, a young wife who is saved from a group of violent rustlers.

Directors: Garth Jennings and Christophe Lourdelet
Sing is the charming animated film about a hustling theater impresario’s attempt to save his theater with a singing competition. Witherspoon voices Rosita, a pig with bigger dreams than being a stay-at-home mom. Besides Witherspoon, Matthew McConaughey, Seth MacFarlane, and Scarlett Johansson also lend their voices.

Director: Jean-Marc Vallée
In Wild, Witherspoon stars as Cheryl, a woman who deals with a recent personal tragedy by walking 1,100 miles of the Appalachian Trail on her own. The film is based on the memoir of the same name by Cheryl Strayed. 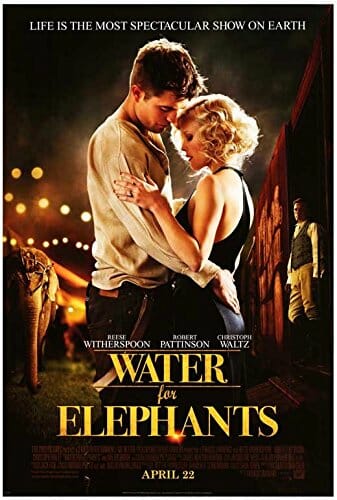 Director: Francis Lawrence
Water for Elephants is based on the bestselling novel of the same name written by Sara Gruen. Set in the 1930s, it focuses on a former veterinary student who survives the Great Depression by taking a job in a traveling circus. All is well until he falls in love with the ringmaster’s wife, Marlena, played by Witherspoon.

Director: Roger Kumble
A modern-day retelling of Dangerous Liaisons, Cruel Intentions includes three of the biggest stars of the 1990s: Sarah Michelle Gellar, Ryan Phillippe, and Reese Witherspoon. In fact, it was while filming Cruel Intentions that Phillippe and Witherspoon fell in love and were married. The film is about two rich and spoiled step-siblings at an elite Manhattan prep school, and their wager to deflower the new headmaster’s daughter before the start of the new school year.

13. The Importance of Being Earnest

Director: Oliver Parker
This adaptation of the famous play by Oscar Wilde stars Witherspoon, Rupert Everett, Colin Firth, and Frances O’Connor. It takes place in 1890s London, where two friends use the pseudonym “Ernest” to disguise their on-the-sly activities. Hilarity, of course, ensues.

Director: Matthew Bright
Freeway has been described as “a twisted take on ‘Little Red Riding Hood.’” This dark, yet engrossing film stars Witherspoon as a teenage prostitute and juvenile delinquent who’s trying to outrun a social worker to get to her grandmother’s house. Unfortunately, she’s being followed by a charming, yet sadistic pedophile and serial killer.

Director: Gavin Hood
Rendition features a powerhouse cast that includes Witherspoon, Jake Gyllenhaal, Meryl Streep, Alan Arkin, and Peter Sarsgaard. The film begins with a bombing in North Africa which leaves 19 dead, including an American. When an Egyptian living in the U.S. is apprehended and blamed, his American wife raises hell to bring out the truth.

Director: Mark Waters
Just Like Heaven is a romantic comedy starring Witherspoon and Mark Ruffalo. Ruffalo, a lonely landscape artist, moves into a new apartment and finds himself falling for the spirit of the beautiful woman who lived there before him.

Director: Mark Palansky
The fairy tale-like Penelope is a modern romance about a young heiress born under a curse that can only be broken when she finds true love. Penelope boasts an all-star cast which includes Witherspoon as Penelope’s oldest friend, Christina Ricci, James McAvoy, and Catherine O’Hara.

Director: Mikael Salomon
A Far Off Place was another one of Witherspoon’s earliest films. In this Disney and Amblin Entertainment-produced adventure story, Witherspoon plays a young girl who is left orphaned when a gang of poachers raid her family’s African farm. Nonni, a visiting American teenager, and a local bushman guide escape into the Kalahari desert.

Director: Marshall Herskovitz
Teenage Reese Witherspoon has a minor role in Jack the Bear, a film about a professional clown who loses his wife in a car accident and is left to care for two young sons.

Directors: Rob Letterman and Conrad Vernon
This is the second animated film to make our ranked list of the best Reese Witherspoon movies. Monsters vs. Aliens is a comedy about a woman who is turned into a giant after she is struck by a meteorite on her wedding day. Now dubbed Ginormica, the woman is taken in by the U.S. government as part of a team of monsters tasked with defeating an alien mastermind.

Director: Robert Luketic
Arguably Witherspoon’s most iconic movie role — or at least her most quoted — Legally Blonde is the delightful tale of Elle Woods, a fashion-obsessed sorority princess who decides to apply to Harvard Law School. Her goal is to win back the boyfriend who dumped her. But once there, Elle realizes there is much more to her than just looks.

Director: McG
Starring Witherspoon, Chris Pine, and Tom Hardy, This Means War revolves around two handsome, but uber-competitive CIA agents. They wage an epic battle against each other when it’s discovered they’re both dating the same woman (Witherspoon).

Director: Andy Tennant
In Sweet Home Alabama, Witherspoon re-adopts her natural Southern accent to play Melanie Smooter, a young woman who has reinvented herself as a New York City socialite. When her on-the-rise politician boyfriend pops the question, Melanie is forced to return to her small hometown in Alabama to get a divorce from the husband she hasn’t seen in seven years.

Director: Mira Nair
William Makepeace Thackeray’s epic novel, Vanity Fair, comes to life in this version starring Reese Witherspoon. She plays Becky Sharp, a young woman who defies her poverty-stricken place in London to ascend the social ladder — regardless of who she must betray along the way.

Director: James Foley
Fear is the terrifying thriller starring Witherspoon and Mark Wahlberg. The two stars play Nicole and David, a seemingly perfect new couple. But David has a dark side. Soon, his adoration becomes obsession, and her love turns into fear.

Director: Robert Benton
No, not that Twilight. Witherspoon’s Twilight was made back in 1998, and stars Paul Newman, Gene Hackman, and Susan Sarandon. The film is about a retired detective who accepts a seemingly simple case, only to find that it tears open old — and deadly — wounds.

Director: Atom Egoyan
Devil’s Knot is a drama about the controversial trial of three teenagers accused of killing three young children as part of a Satanic ritual. Besides Witherspoon, the film also stars Colin Firth, Alessandro Nivola, and Amy Ryan.

Director: Mike Barker
A seemingly simple plan to steal money goes awry in 1999’s Best Laid Plans. The film stars Witherspoon as Lissa, a young woman who attempts to con a successful man, only to find herself tied up in his basement.