Robin Williams was undoubtedly one of the greatest actors of all time. Before his untimely death in 2014, he racked up 107 acting credits, many of which were movies ranging in genre from crime comedy to family-friendly animations. With so many good movies to choose from, coming up with the 30 best Robin Williams movies of all time was quite the challenge. Fortunately, we were able to consult IMDb rankings to narrow down our list to those below. Did your favorite Robin Williams movie make the cut?

Director: Gus Van Sant
Those familiar with Robin Williams’s resume aren’t likely to be too surprised that his best film is Good Will Hunting. After all, the film won Robins an Academy Award in the Best Actor in a Supporting Role category, and was nominated for Best Picture. Written by Ben Affleck and Matt Damon (who also won Oscars for this script), Good Will Hunting tells the story of a janitor at M.I.T. who has a remarkable gift for mathematics.

Director: Peter Weir
In Dead Poets Society, Williams plays John Keating, an English teacher at a prestigious prep school who inspires his students to look at poetry with a different perspective. The film garnered Robins a slew of acting nominations at the Academy Awards, Golden Globes, and the BAFTA Awards, among others.

Directors: Ron Clements and John Musker
Disney’s hit animated movie, Aladdin tells the tale of a street urchin and a power-hungry Grand Vizier as they vie for control of a magic lamp that could make all their dreams come true. Robins voices the flamboyant and fabulous genie who lives in the lamp. Released in 1992, well before the major awards shows included categories for the best animated films, Aladdin was nominated at the Golden Globes for Best Motion Picture – Musical or Comedy.

Director: Penny Marshall
Starring Williams and Robert De Niro, Awakenings is about victims of an encephalitis epidemic who receive a new lease on life when a new drug becomes available. Though no statues were taken home, Awakenings was nominated for Best Picture at the Oscars, while Williams received a Best Actor nod at the Golden Globes.

Director: Kirsten Sheridan
August Rush is the story of a young orphan who believes his musical talents will help him to find his birth parents. Williams plays “Wizard” Wallace, a brash vagrant who teaches homeless kids to play music and perform on the streets for money. The film also stars Freddie Highmore, Keri Russell, Jonathan Rhys Meyers, and Terrence Howard.

Director: Terry Gilliam
The Fisher King, starring Williams and Jeff Bridges, is about a former radio DJ who seeks redemption for a terrible on-air mistake by helping a deranged homeless man who was an unwitting victim of said mistake. Williams portrays the “deranged homeless man,” and received both Oscar and Golden Globe nominations for his performance.

Director: Woody Allen
Written by, directed by, and starring Woody Allen, Deconstructing Harry is about a writer haunted by his characters as he suffers through writer’s block. Williams appears as one of Allen’s characters, as do Julia Louis-Dreyfus, Tobey Maguire, and Stanley Tucci, to name  a few.

Director: Barry Levinson
Loosely based on the real-life experiences of DJ Adrian Cronauer, Good Morning, Vietnam is about an unorthodox radio DJ who gets assigned to the U.S. Armed Services radio station in Vietnam in 1965. Williams plays Cronauer, a role for which he was nominated for a Best Actor Oscar, Golden Globe, and BAFTA.

Director:Lee Daniels
Lee Daniels’ The Butler is a powerful biopic about Cecil Gaines, a White House butler who served eight presidents through the Civil Rights movement, Vietnam, and other major historical events. The star-studded cast includes Williams as Dwight D. Eisenhower, along with Forrest Whitaker, Oprah Winfrey, Cuba Gooding Jr., and John Cusack, among others. 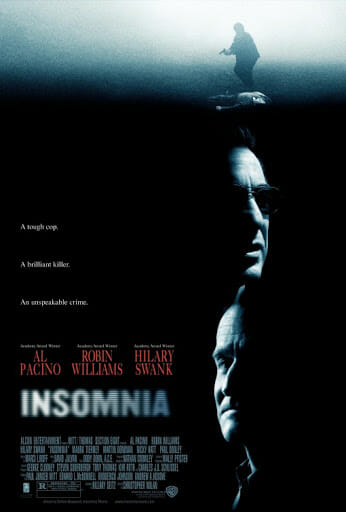 Director: Christopher Nolan
In Insomnia, Williams plays the mysterious Walter Finch, a famous crime author who lives in a small town in Alaska in which a 17-year old girl is found brutally murdered. The movie co-stars Hillary Swank as an ambitious local detective, and Al Pacino as a Los Angeles police detective who travels to Alaska to help solve the case.

12. The World According to Garp

Director: George Roy Hill
Based on the novel by John Irving, The World According to Garp is about a struggling young writer whose entire life becomes dominated by an unfaithful wife and a mother whose radical feminist manifesto turns her into a cultural icon. Williams plays the titular character, while Glenn Close, John Lithgow, and Mary Beth Hurt also star.

Director: Mike Nichols
In The Birdcage, a gay cabaret owner and his drag queen partner put up a false straight front so that their son will introduce them to his fiancée’s traditional, moralistic parents. Williams plays the cabaret owner, Nathan Lane his partner. Dianne Wiest, Gene Hackman, Calista Flockhart, and Hank Azaria also star.

14. What Dreams May Come

Director:Vincent Ward
What Dreams May Come is the visually stunning story of Chris Nielsen, who dies in an accident and goes to Heaven. When Chris discovers that his wife has killed herself, he embarks on an afterlife adventure to reunite with her. The film received an Oscar nomination for art direction and an Oscar win for visual effects, while Williams’ co-star, Cuba Gooding Jr., received awards from the Blockbuster Entertainment Awards and the Image Awards.

Director: Chris Columbus
A favorite for many Robin Williams fans, Mrs. Doubtfire is about an actor who disguises himself as a female nanny in order to spend more time with his children. The movie is based on the novel by Anne Fine, and co-stars Sally Field, Pierce Brosnan, Harvey Fierstein, and Mara Wilson.

Director: Joe Johnston
Though the franchise has since continued, Robin Williams’ original Jumanji was released in 1995 and has become a bit of a cult classic. Williams plays Alan Parrish, a man who has been trapped inside a dangerous board game for decades. When two kids — played by Jonathan Hyde and Kirsten Dunst — accidentally release Alan and a slew of other dangers, the trio must finish the game to save themselves.

Director: David Duchovny
Williams co-stars in House of D, about an American artist who returns home from Paris to reconcile himself with family and friends. Interestingly, the film was written by, directed by, and stars former X-Files star David Duchovny.

Director: Chris Columbus
In 1999, Williams re-teamed with Mrs. Doubtfire director Chris Columbus to make Bicentennial Man. Based on the original short story and novel by Isaac Asimov, Bicentennial Man tells the story of an android who gradually acquires emotions as he strives to become human. Sam Neill also stars in this Academy-Award nominated movie.

Director: Kenneth Branagh
Five years before they worked together on Hamlet, Williams appeared in Kenneth Branagh’s Dead Again. Starring Emma Thompson, Dead Again is about a woman who has lost her memory and is taken in by an orphanage in Los Angeles. When a private eye is tasked with tracking down her identity, he finds that he has a past life connection to her that endangers both their lives.

Director: Tom Shadyac
Patch Adams is inspired by the real-life Hunter “Patch” Adams, a determined medical doctor who uses humor and pathos to treat even the most hopeless of patients. Williams plays Patch, while Philip Seymour Hoffman, Daniel London, and Monica Potter co-star.

Director: Mark Romanek
One Hour Photo is a dark drama/thriller in which Williams portrays a mentally unstable photo developer who becomes obsessed with the lives of a middle-class family. Connie Nielsen and Michael Vartan co-star in this movie which garnered Williams acting awards given by the AARP Movies for Grownups Awards and the Academy of Science Fiction, Fantasy, & Horror Films.

Director: Peter Kassovitz
Inspiring against all odds, Jakob the Liar tells the story of an ordinary inhabitant of a Jewish ghetto, who fakes news about Allied offensives in order to provide hope for other victims of the cruel Nazi regime. Alan Arkin and Liev Schreiber co-star as fellow ghetto inhabitants.

Director: Bill Kroyer
FernGully has remained a family favorite since its release in 1995. Williams, Christian Slater, and Samantha Mathis lend their voices to this animated classic about magical inhabitants of a rainforest who must fight to save their home from a polluting force of destruction. Upon its release, FernGully was celebrated with an Annie Awards nomination for Best Animated Feature and a win at the Environmental Media Awards for best feature film.

26. Moscow on the Hudson

Director: Paul Mazursky
In the crime comedy Moscow on the Hudson, Williams plays Vladimir Ivanoff, a Russian musician who defects in Bloomingdale’s department store in New York City, only to find that adjusting to life in America is not as simple as he had hoped.

Director: Shawn Levy
The only film in the popular franchise to make our list of Robin Williams’s best movies, Night at the Museum is about a new night security guard at the Museum of Natural History (played by Ben Stiller), who discovers that an ancient curse causes all of the exhibits to come to life during the night. The movie is packed with big stars, including Dick Van Dyke, Mickey Rooney, Ricky Gervais, and Rami Malek, to name but a few. Williams plays President Teddy Roosevelt.