As one of the most iconic film stars of all time, Audrey Hepburn remains as alluring today as she was at the peak of her career. Indeed, from My Fair Lady to War and Peace, Audrey Hepburn starred in some great movies! Whether you’re looking to binge watch an Audrey lineup, want to get to know an icon, or are just in search of a good movie, we’ve got you covered. Keep scrolling for the 25 best Audrey Hepburn movies, ranked. 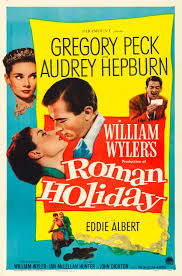 Rated by IMDb users as an impressive 8.0 out of 10, Roman Holiday is Audrey Hepburn’s best movie. Directed by William Wyler and released in 1953, the romantic comedy stars Hepburn as a sheltered princess. She escapes a fit of boredom by taking off to Rome, where she falls in love with an American journalist played by Gregory Peck. Hepburn was awarded a Best Actress Oscar for her portrayal of Princess Ann. 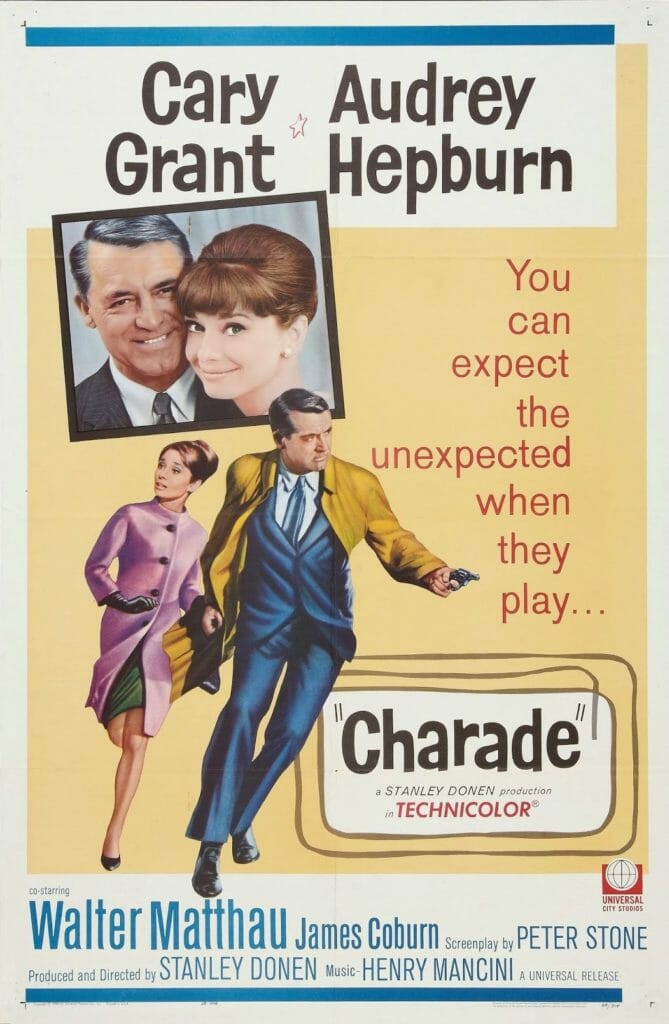 In Charade, Hepburn plays Regina Lampert, the newly widowed wife of a murdered thief. Romance and drama ensue as Regina, living in Paris, is pursued by multiple men who want the fortune stolen by her husband. Can Regina trust any of them? Cary Grant, Walter Matthau, and James Coburn co-star. 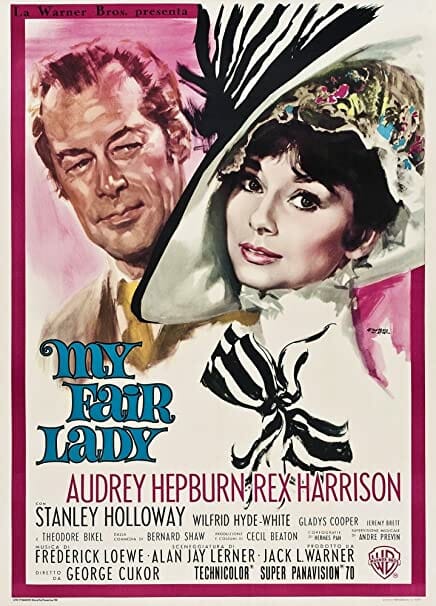 Though it’s arguably Audrey Hepburn’s most famous movie, My Fair Lady is ranked by IMDb users as her third best film. The classic musical portrays Hepburn as Eliza Doolittle, a London flower girl who becomes the focus of a bet made by snobby phonetics professor Henry Higgins (played by Rex Harrison). My Fair Lady won an astounding eight Oscars, including Best Picture.

Wait Until Dark is far from the romantic comedies for which Audrey Hepburn is most typically associated. Rather, this horror/thriller film is about a recently blinded woman who becomes terrorized by a band of thugs as they attempt to steal a drug-filled doll they believe is in her possession. Hepburn received a Best Actress Oscar nomination for her portrayal of the bind Susy. Wait Until Dark also stars Alan Arkin and Richard Crenna. 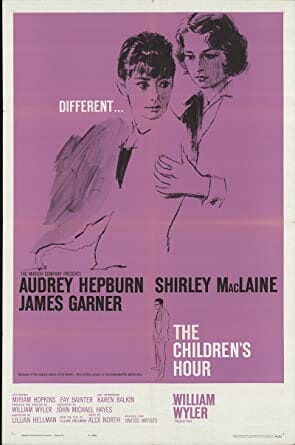 In 1961, Hepburn re-teamed with director William Wyler to make The Children’s Hour. This romantic drama, ranked as Audrey Hepburn’s fifth best movie, stars the actress as Karen Wright, a headmistress at a school for girls. Trouble ensues when a student accuses Karen and her long-time best friend, a teacher at the school, of being lesbians. Shirley MacLaine co-stars in this film which was nominated for five Academy Awards. 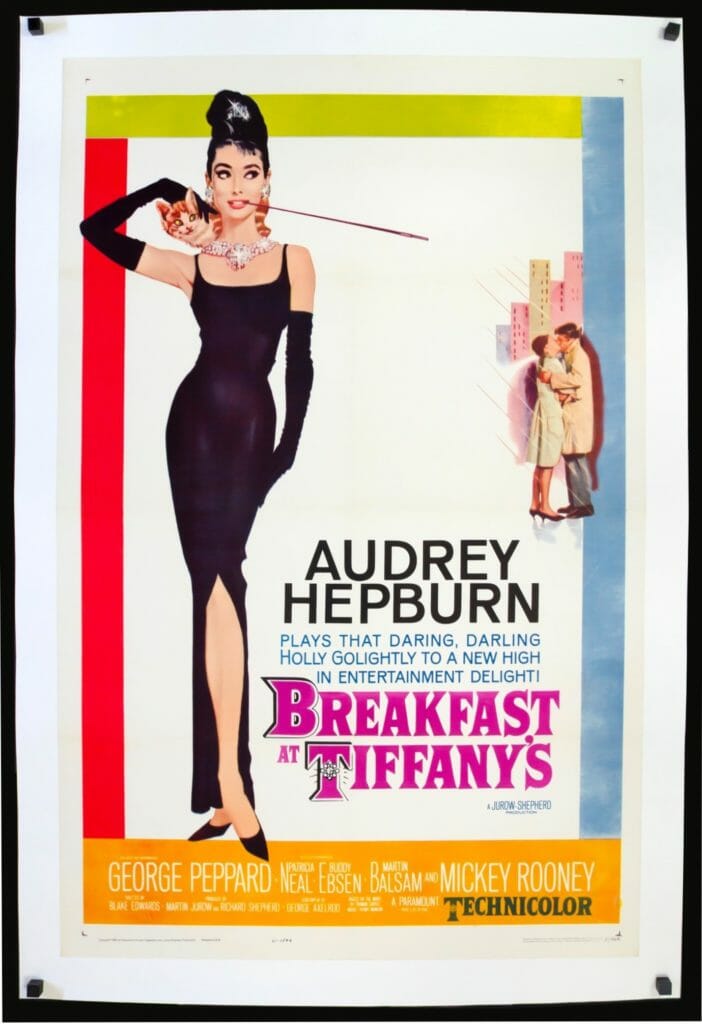 Based on the classic novel by Truman Capote, Breakfast at Tiffany’s is about a beautiful New York socialite with a questionable past who falls in love with a young man who has just moved into her building. Hepburn plays the iconic socialite, Holly Golightly, while George Peppard portrays the young man, Paul. Hepburn received both an Academy Award and Golden Globe nomination for Best Actress in a Leading Role. 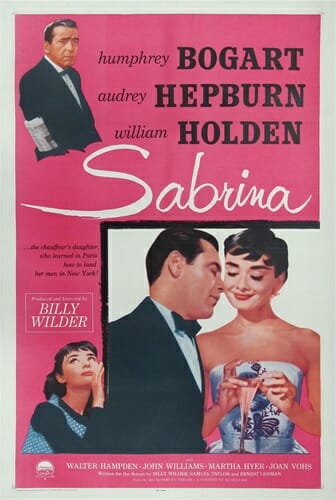 In Sabrina, Hepburn stars alongside William Holden and Humphrey Bogart as Sabrina Fairchild, the daughter of a chauffeur to a wealthy playboy. Although said playboy becomes interested in Sabrina, it’s actually his more serious brother who would make the better match. Sabrina won an Oscar for its costume design, and garnered Academy Award nominations for Best Actress (Hepburn), Best Director (Billy Wilder), and Best Screenplay.

8. How to Steal a Million 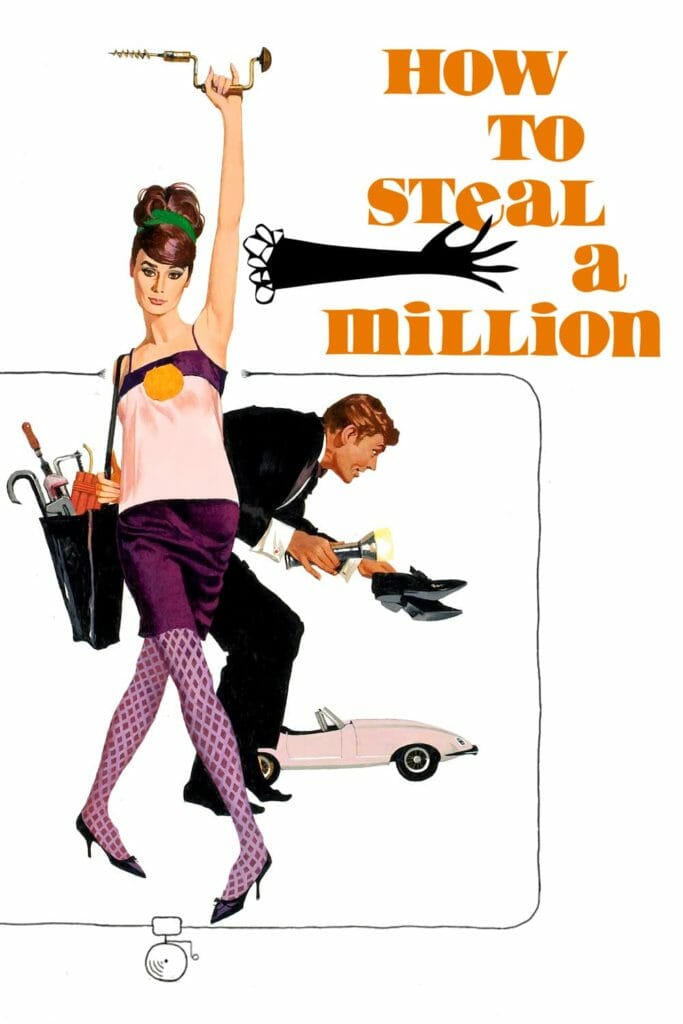 In How To Steal a Million, Hepburn plays Nicole, a woman aiming to steal a statue from a Paris museum in order to conceal her father’s art forgeries. Peter O’Toole and Eli Wallach co-star in this crime comedy which was nominated by the Writers Guild of America in the category Best Written American Comedy. 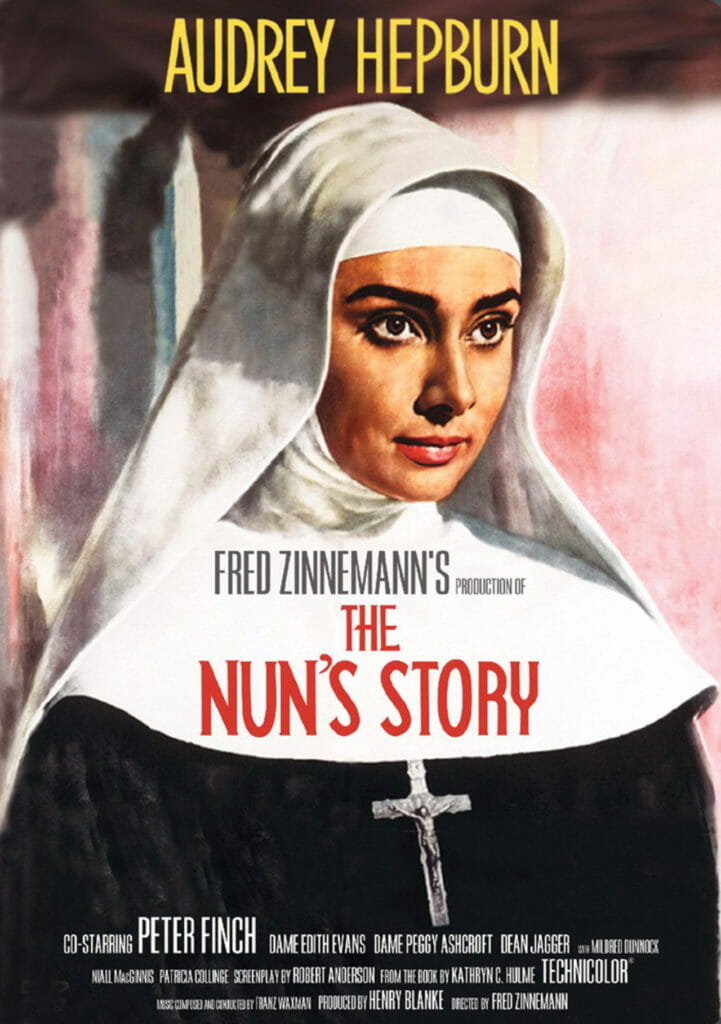 Produced in 1959, The Nun’s Story is another of Audrey Hepburn’s more serious films. The movie tells the story of Sister Luke, who leaves a wealthy Belgian family become a nun. The film follows her struggles and triumphs through taking her vows, various crises, and World War II. 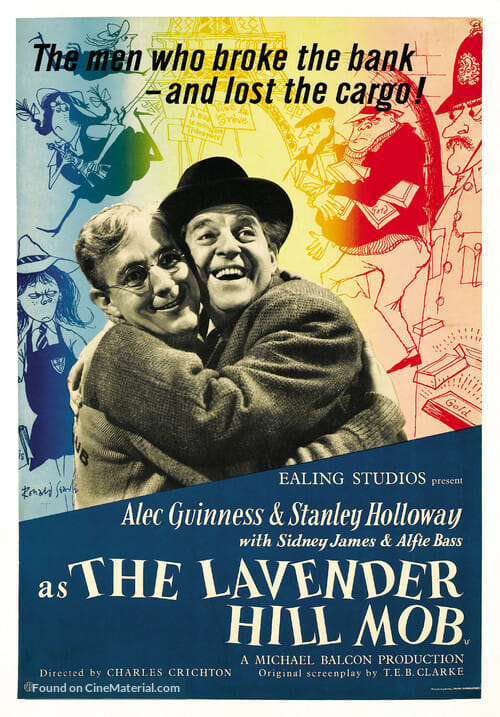 The Lavender Hill Mob was one of Audrey Hepburn’s first films, and while she doesn’t play a leading role, IMDb users still rank the movie as the actress’s 10th best film. Starring Alec Guinness and Stanley Holloway, The Lavender Hill Mob is about a shy bank clerk and his eccentric neighbor who team up to steal gold bars and smuggling them out of the country as miniature Eiffel Towers. 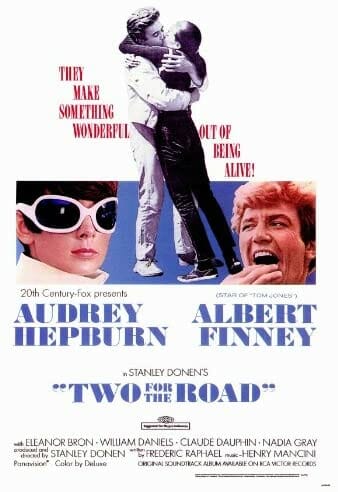 “A couple in the south of France non-sequentially spin down the highways of infidelity in their troubled ten-year marriage.” That’s the tag line for Two for the Road, in which Hepburn and Albert Finney star as Joanna and Mark Wallace. The romantic dramedy earned Hepburn a Golden Globe nomination for Best Actress, while screenwriter Frederic Raphael was nominated for an Academy Award for his screenplay.

12. Love in the Afternoon 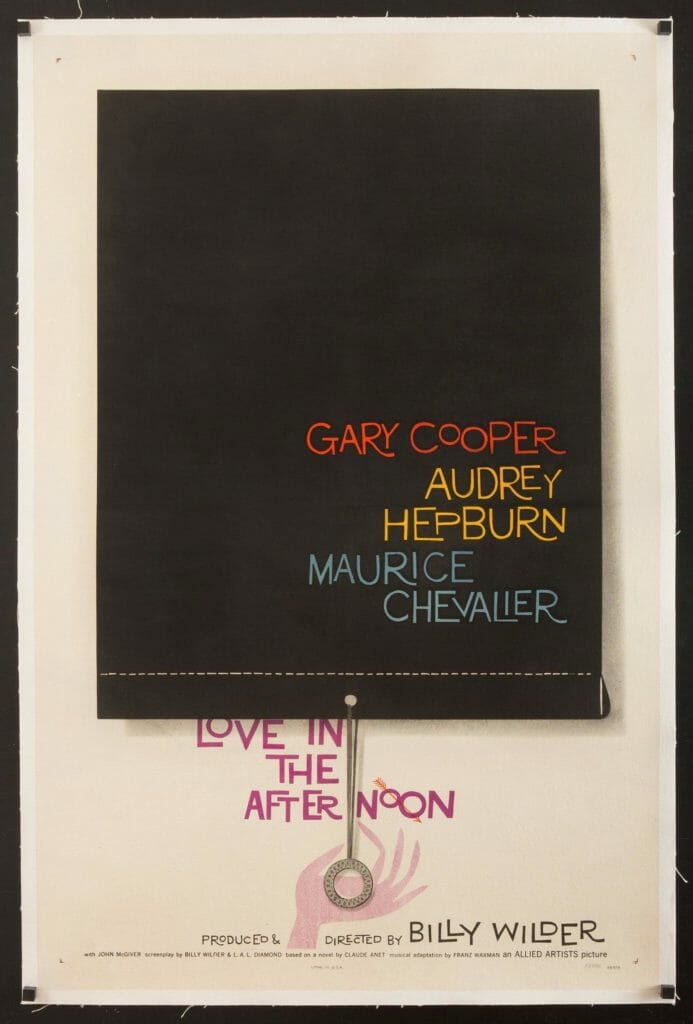 Audrey Hepburn stars alongside Gary Cooper and Maurice Chevalier in Love in the Afternoon. The crime comedy tells the story of a middle-aged playboy who falls for the daughter of a private detective. Things get complicated when the private detective is hired to catch the playboy with the wife of another man. Love in the Afternoon was well received by critics, and nominated for a number of awards including Golden Globes for Best Motion Picture, Best Actress, and Best Actor. 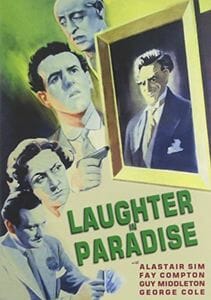 Hepburn has a small role as “Cigarette Girl” in Laughter in Paradise, one of her first-ever films. Still, the comedy is absolutely worth watching, as IMDb users have rated it an impressive 7.1 out of 10. The movie is about a millionaire practical joker who dies and divides his fortune amongst four heirs. But in order to collect their inheritance, each heir must first carry out a list of zany instructions. 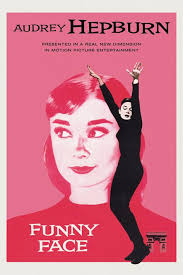 A favorite movie among Audrey Hepburn fans is Funny Face. In this musical romantic comedy, Hepburn plays the adorable Jo Stockton, a clerk at a bookshop who becomes a new fashion model sensation after an impromptu photo shoot in her store. Funny Face co-stars Fred Astaire, and was nominated for four Academy Awards. 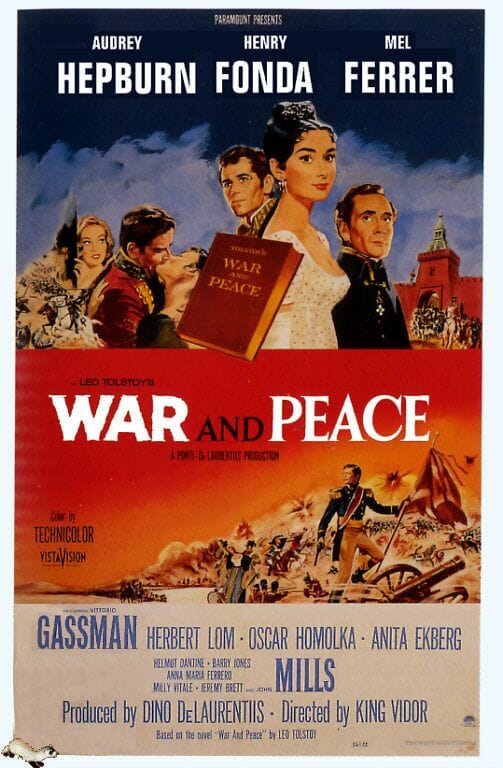 Based on Leo Tolstoy’s Russian epic, War and Peace proved to be one of Hepburn’s star-making films. In this story about two aristocratic families trying to survive Napoleon’s invasion of Russia, Hepburn plays Natasha Rostova, the object of affection of Count Pierre Bezukhov (played by Henry Fonda) — but not the woman he marries. Hepburn received a slew of Best Actress nominations from organizations including the Golden Globes and the BAFTA Awards. 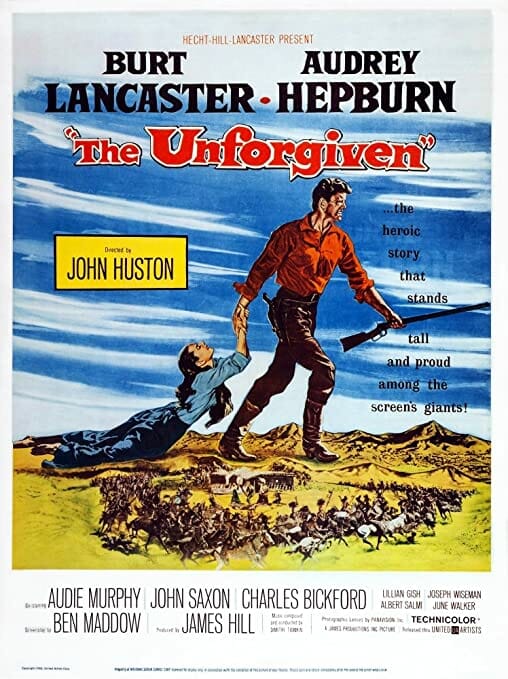 John Huston’s The Unforgiven is a 1960 Western that touches upon issues of racial intolerance. The film tells the story of the Zachary family, whose community turn on them when it is revealed that the family’s daughter, Rachel, is actually a child of the Kiowa tribe, stolen in a raid. Hepburn plays Rachel, while Burt Lancaster and Audie Murphy also star. 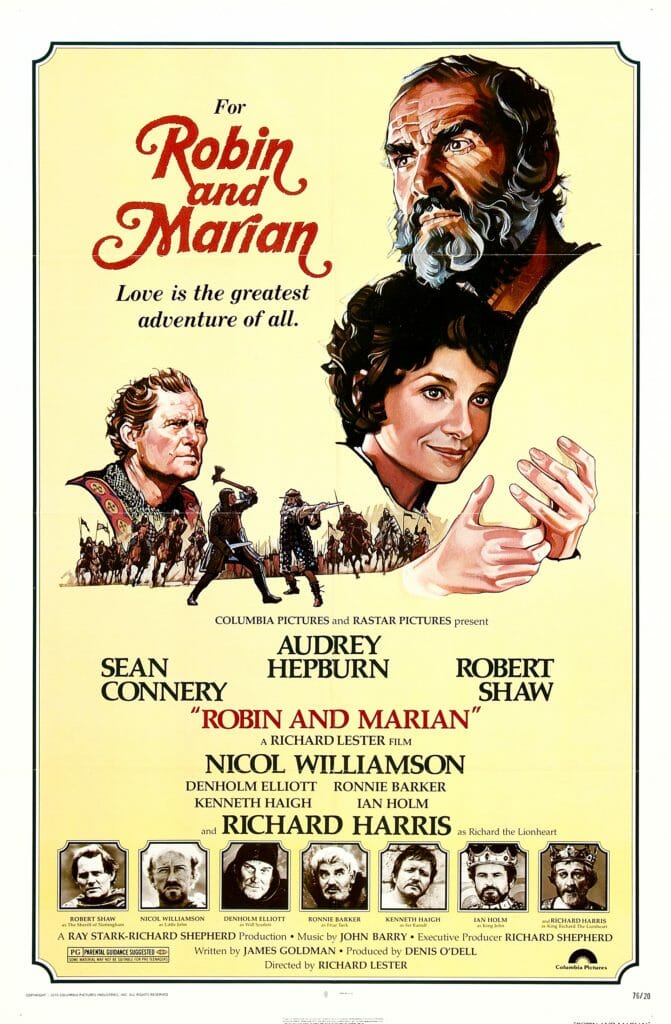 Richard Lester’s 1976 film, Robin and Marian, continues the Robin Hood story we all know and love so well. This time, an aging Robin Hood (played by Sean Connery), returns from fighting in the Crusades to woo Marian one last time. Hepburn plays Maid Marian, and Richard Harris plays King Richard the Lionheart. 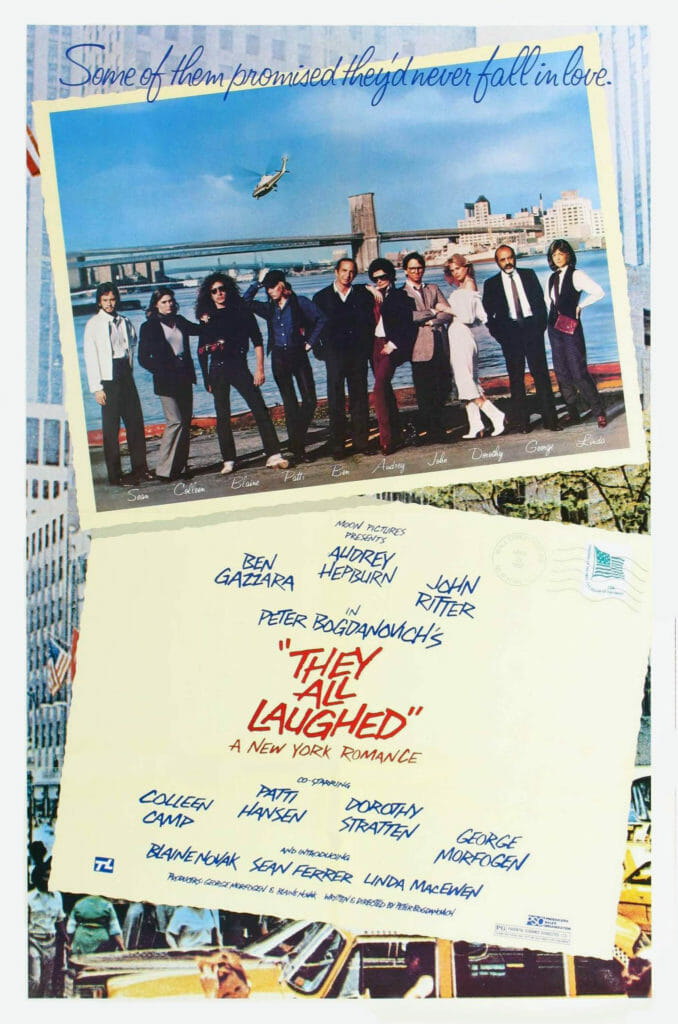 They All Laughed is a romantic comedy about a team of detectives who are following — and being followed by — a group of beautiful women. Hepburn plays Angela Niotes, one of the women. The film also stars Ben Gazzara, Patti Hansen, and John Ritter, to name but a few.

19. Paris When It Sizzles

Paris When It Sizzles is the delightful romantic comedy about a Hollywood screenwriter (William Holden) and his sprightly young assistant, Gabrielle (Hepburn). When the screenwriter is burdened with writer’s block, Gabrielle tries to help him by acting out his fantasies of possible plots. 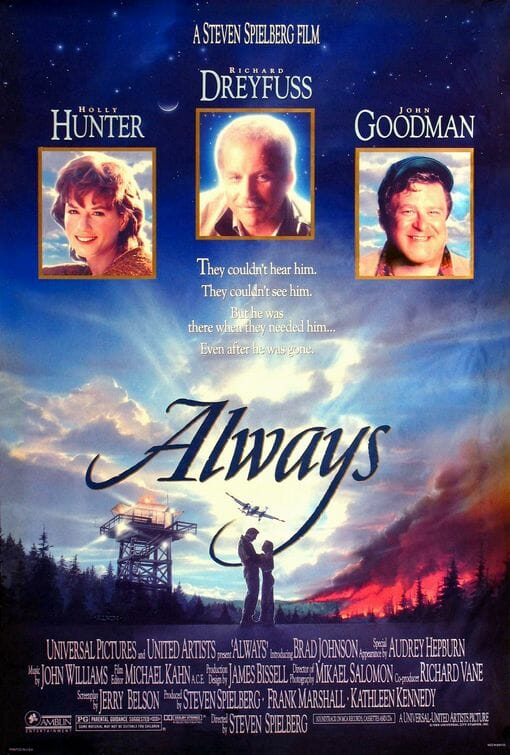 Audrey Hepburn’s last film was Steven Spielberg’s Always. Also starring Richard Dreyfuss and Holly Hunter, Always is about the spirit of a recently deceased professional pilot who mentors an amateur pilot while watching his mentee fall in love with the woman he left behind. Hepburn plays Hap, the pilot’s own mentor in Heaven.

In Secret People, sisters Maria and Nora become caught up in the plot to assassinate the dictator who killed their father. But their plan turns tragic when an innocent bystander is killed by the bomb they plant. Hepburn portrays Nora, while Valentina Cortesa plays her sister Maria.

In Love Among Thieves, Hepburn plays Baroness Caroline DuLac, an aristocrat whose fiancé is kidnapped in Latin America. To pay his ransom and save him, Caroline teams up with a concert pianist to steal some priceless Faberge eggs. The fun, comedic heist film also stars Robert Wagner and Jerry Orbach. 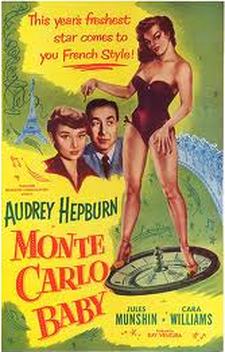 Monte Carlo Baby is a French film which has also been called We Go To Monte Carlo. When bandleader Ray Ventura finds a baby, he mistakes it for his own grandson and takes the boy on tour with him. Meanwhile, the baby’s parents — a movie star and her estranged husband — frantically look for their son. 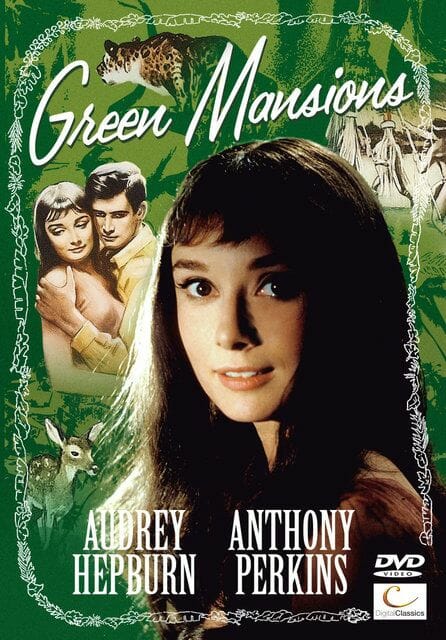 Green Mansions is a romantic adventure film about a man touring the jungles of Venezuela, only to meet and fall in love with a strange jungle girl. Hepburn portrays the female Tarzan-like character, Rima, while Anthony Perkins plays the man, Abel. 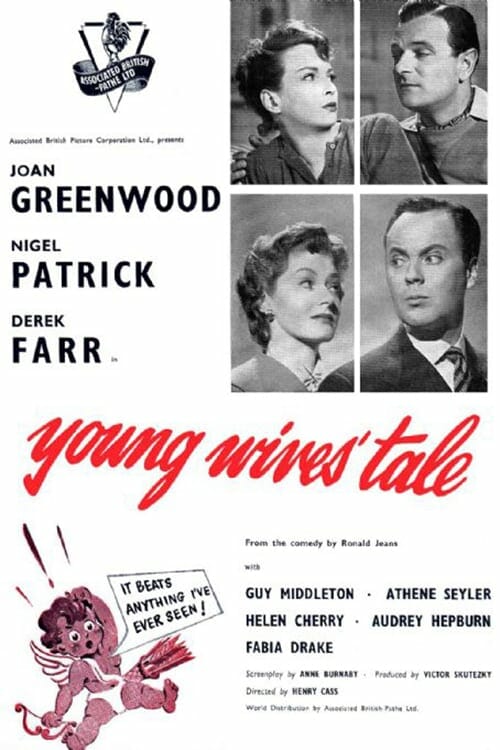 In post-war Britain, a housing crisis results in a shy woman being forced to share a house with two couples. Tension — and humor — ensues as the woman becomes infatuated with one of the husbands. Young Wives’ Tale stars Hepburn, Nigel Patrick, Derek Farr, Guy Middleton, and Helen Cherry.