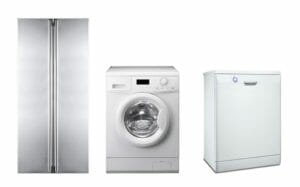 As the 20th century unfolded, new home appliances came more readily available, making the homemaker’s life a bit easier. Around 1950, inventions began coming frequently, and the market for large appliances opened as income for the middle-class grew. By the 1970s a new home was expected to include many of those devices.

It was not long before homemakers demanded facts about the products they were purchasing. Several consumer-based magazines grew to fill that niche. Ranking systems came into play as products competed for an expanding market.

When the Internet bloomed, many of those traditional magazines found increased competition from websites that offered the same service. At first, there were few Internet users interested in large appliance reviews, but the interest grew as Internet access increased. Sites such as Best Choice Reviews quietly grew, becoming the consumer advocates that online users most frequently visited.

There were times when consumer advocates derided online reviews as self-serving and price driven. Today, those accusations still apply to some sites, which is why online locations like Best Choice Reviews have grown in viewership.

At the start of the Internet access age, the issue was that of distance. Before the Internet, consumers could always confront the local merchant from which they purchased their large appliance with issues that were unforeseen by the consumer. Weak motors and problematic agitators in washing machines lowered the reputation of local merchants who saw a resulting diminishment in returning clientele. The force of consumer opinion at the local level moved up the line as the manufacturer began to feel the pinch of slowing sales.

When access to the Internet became the norm, the force of local influence began to diminish. Several websites took up the task of reviewing products for consumers. Unfortunately, some of these sites took pay from manufacturers to elevate their reviews. Just like the snake-oil salesmen of the old west, these sites were quickly revealed and gradually disappeared. Sites like Best Choice Reviews took their place. As product reviews grew in reputation, so did the viewership and the resulting online traffic spoke of the value of honesty and ethical conduct in the capitalist system.

What It Takes to Make an Honest Review of Large Appliances

Best Choice Reviews recognizes that there will always be instances where a factory fails. The trick is to find large appliances where the failed large appliance is the exception and not the rule. The best reviews of large home appliances include a system where the products are evaluated via a rigorous set of dynamics. Sites like Best Choice Reviews use parameters like these that are important to the homemaker.

• Product features: Every modern manufacturer competes with other manufacturers through its product features. Large appliances such as trash compactors or dishwashers are accepted as an everyday convenience of the modern era. It is the features like timers, action controllers, and noise dampeners that were once considered luxury items that are now opened to review as a demanded feature of the appliance.

• Reliability: The life expectancy of a large home appliance is a huge issue. These items come at a considerable cost, especially if they include untested upgrades. It is the responsibility of a reviewer to discuss the reliability of these items.

• Value: Every consumer, when confronted with the cost of a large home appliance, takes into consideration their budget. The honest reviewer considers it too. Questions like: what is the purpose of the innovation, how long can you expect excellent performance, and what is the appliance’s work capacity.

• Customer Support: The question of whether or not a consumer can trust the manufacturer is a huge one in today’s market. With factories seemingly moving from country to country and city to city, the question of customer support grows more significant with every move. Consumers who purchased a product from a manufacturer deserve the help of that manufacturer.

The ordering of Large Appliances is easy. You point the cursor to the appliance you want and click on it; then you give your payment information online. Many sites offer to let you pay by installment as the cost of a large home appliance can be daunting.

The issue comes with delivery. There are not many transporters that will deliver a heavy item directly to your home. So, ordering a large appliance online is usually done via a local merchant.

If you are ordering from a manufacturer, choose carefully. Make sure your financial information is protected via the most modern encryption methods before ordering. Assure yourself of the same thing if you are working with a purchasing agent or online warehouse, though these professionals normally maintain confidentiality with the highest grades of information encryption as a cost of doing business.

What Kind of Large Appliances are Reviewed Online?

Online review sites like Best Choice Reviews carry reviews of every kind of large home appliance. These appliances are not limited to the kitchen or the utility room. Large appliances are an essential ingredient to any modern home.